Welcome to our on-line version of our newsletter!  We only put up a couple of items from our colorful 4 page newsletter which can be received FREE for 1 year when you become a member.  Won't you join today?

Last year Songbirds of Northern Indiana released 82% of all birds that came to their facility.  Once in a while we have spectacular results in our rehabilitation efforts.  Einstein, a beautiful female Orchard Oriole was found in an alley on the ground by member Kathleen Ernsberger's dog. Einstein had a terrible head injury, probably from being hit by a car.  Unable to stand due to lack of balance, she was rolling around in the alley before being saved by Kathleen and brought to Pat for help. 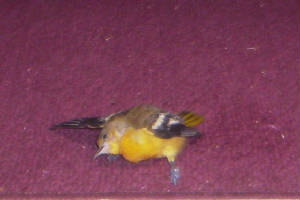 The picture above is Einstein on day #1.  She finally
quit rolling when she found a rug and was able to
grasp it with her toes.
Einstein received the medication, care, and rest she needed to recover and regain her sense of balance.  It took a couple of weeks of hard work before Einstein could feed herself. 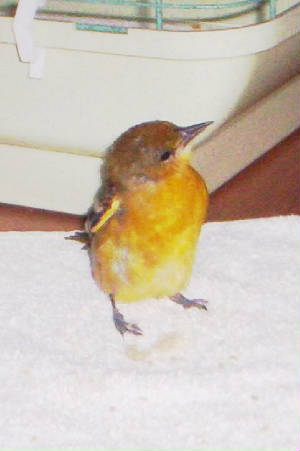 She was able to sit upright as long as her toes had something to grasp if she felt unsteady.  Once she became able to feed herself, stand and perch, she graduated to the aviary where she spent a couple weeks before being released back into the wild.

Orchard orioles are seldom seen in our area as they are only in North America for a few short weeks to nest and raise their young.  Then they return to Central America where they will spend the rest of the year.

While not on the endangered list, orchard oriole populations are shown to be declining by the North American Breeding Bird Survey. 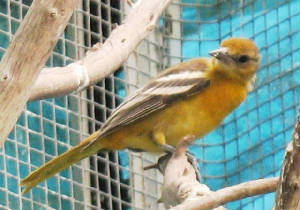 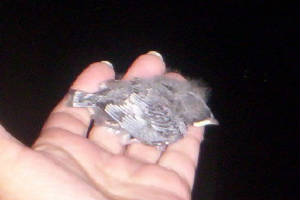 Brian came to us as a pin-feathered youngster,
not nearly ready to fly.

Brian had been found by member Jan Wagoner on the floor of the horse barn.  It appeared that Brian had hatched later than his nest mates and had been accidentally left behind.
When it was time to release Brian, member Connie Green (Jan's sister), came to the rescue.  Connie had planned to spend an entire day in the horse barn and so could release Brian and be present in case he needed help in some way.
She reported that evening that when she and Brian arrived at the barn she took Brian out of his carrying case and placed him up high near an old swallow nest.  Brian could hear the swallows outside and had quite an amazed look on his face, but flitted around checking out the new location and "chatted" with Connie when she fed him a couple of times.  When a swallow takes a bite of food they make a fast, feeding chatter which one of the swallows outside heard.  That new swallow silently slipped into the barn, unnoticed by Connie.  A little while passed and Brian moved over to a rafter going towards the inside of he barn.  "Wrong way," Connie told him as she continued to work.  It was a few more minutes when Brian, with the adult swallow started circling inside the barn.  Then swoosh, out the door they went.
The adult swallow heard Brian's feeding baby chatter and had come in to see who was in the barn.  Being afraid of the human, the adult called Brian to the back of the barn to test his flying skills before escorting him out to meet the colony and give Brian his first hunting lesson.
A lot of birds travel in flocks, but birds who form colonies will accept, adopt and train a juvenile of their own species to successfully survive and thrive.
Connie reported that the swallows do come back into the barn to sleep, but she could not tell which was Brian.  He was acting like a real swallow and being cared for by the colony. 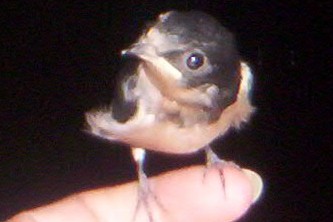 Over 800 species of wild birds are protected by federal law under the Migratory Bird Treaty of 1918.  The law was passed basically to prevent these birds from being made into pets or from being destroyed by humans for any reason.
A wild bird rehabilitator must posses both a state and federal permit to care for injured and orphaned birds.  Even vet clinics aren't allowed to treat wild birds unless they have these same permits or work together with someone who does.
Due to this federal law, the rehabilitation of protected birds is regulated by the state DNR and the Department of the Interior.  Rehabilitators are required to maintain proper records of each bird that comes in for treatment; the species, where it was found, the name and address of who found it, the nature of the problem and when and where it goes after it leaves the rehabilitator's care.  They must also submit an annual report that includes all of the above information in order to keep their permits.
Conservation officers inspect rehabilitation facilities periodically and by surprise for strict adherence to USDA standards for caging requirements, feeding requirements, overall conditions of care, and the required paper work.
Wild bird rehabilitators also report any signs of abuse or acts of cruelty to birds to the proper authorities.
Volunteer to help us feed the babies. We'll teach you how.

Windows strikes, lawn poisons, pet attacks are some of the reasons wild songbirds are brought to us. No government agency funds or reimburses us for the cost of rehabilitating. Your donation is 100% tax deductable, so please, give generously. Your own back yard will reap the benefits. Thank you!